The engineering profession in the 19th century was still rare and much needed and noble, because of that under the auspices of the kingdom, the Dutch engineers established an engineer's union organization called the Koninklijk Instituut Van Ingenieurs (KIVI). 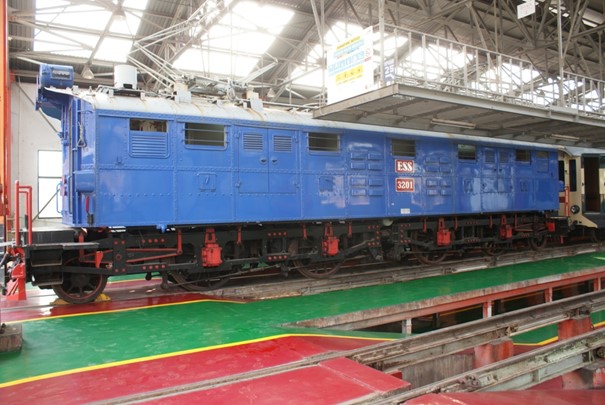 The first electric locomotive made by the Werkspoor – HEEMAF (Netherlands) factory and operated in Indonesia since 1925. (Photo: Widoyoko)

After the Dutch government recognized Indonesia's sovereignty in 1949, in order to gather native Indonesian engineers, President Sukarno ordered Ir. H Djoeanda Kartawidjaja and Ir. R. Rooseno Soerjohadikoesoemo to establish the Indonesian Engineers Association in 1952. Institutionally, KIVI (Indonesian branch) and PII remain on good terms. Some KIVI members have even been appointed as professors at TH Bandung, for example Ir. R.A.D. Loven, who was appointed a professor for the railway department in 1954. Along with the development of the Indonesian branch of the KIVI organization, the Indonesian branch of the KIVI organization ended because many of its members returned to the Netherlands and the monthly magazine De Ingenieurs in Indonesië finally ended its publication in 1957.

In 2022, PII is exactly 70 years old, while KIVI this year is celebrating its 175th anniversary, therefore to re-establish good relations between the two institutions, the Indonesia Transportation Forum (ITF) organization has since last year initiated a meeting between PII and KIVI. The ITF is an Indonesian professional organization in the field of transportation in the Netherlands, which is a bridge between professionals and institutions from Indonesia and the Netherlands.

After the ITF succeeded in convincing KIVI that this meeting was very important to improve relations between the two institutions, the next step was to lobby the ITF for PII, especially in the railway sector, to participate in this event. After several meetings, it was finally agreed that a meeting between PII and KIVI would be held at KIVI's head office in The Hague, last Monday, September 26, 2022.

The PII – KIVI meeting took the theme “Development of Railway Technology – Indonesia”. On this occasion, the development of railway technology in Indonesia and also in the Netherlands was presented. As we know, the railway system in Indonesia is entirely designed and built by Dutch engineers. After Indonesia's independence there were many changes in both countries. What is striking, for example, is the railway industry in the Netherlands, which used to export a lot of its products to Indonesia, in the 21st century this has become history. Meanwhile, in Indonesia the rail industry is and continues to grow rapidly.

With this meeting, each party can find out about technological developments in each country so that later we just have to match what things are right to be implemented or collaborated between each country.

From Indonesia, 3 PII representatives were present, led by Dr.Ir. Hermanto Dwiatmoko, MStr, IPU, ASEAN Eng. He is the Chairman of the Railway Engineering Agency (BKTKA-PII) as well as the General Chair of the Indonesian Railways Society (MASKA). Meanwhile, the KIVI was represented by the General Manager, Miguel Delcour BEng, MScBA, ECBS. Meanwhile, the meeting was opened by the representative of the Indonesian Ambassador, Mr. Freddy Panggabean. After the opening remarks from the Indonesian Embassy, ​​KIVI and PII signed a Memorandum of Understanding, which will be the basis for future cooperation. 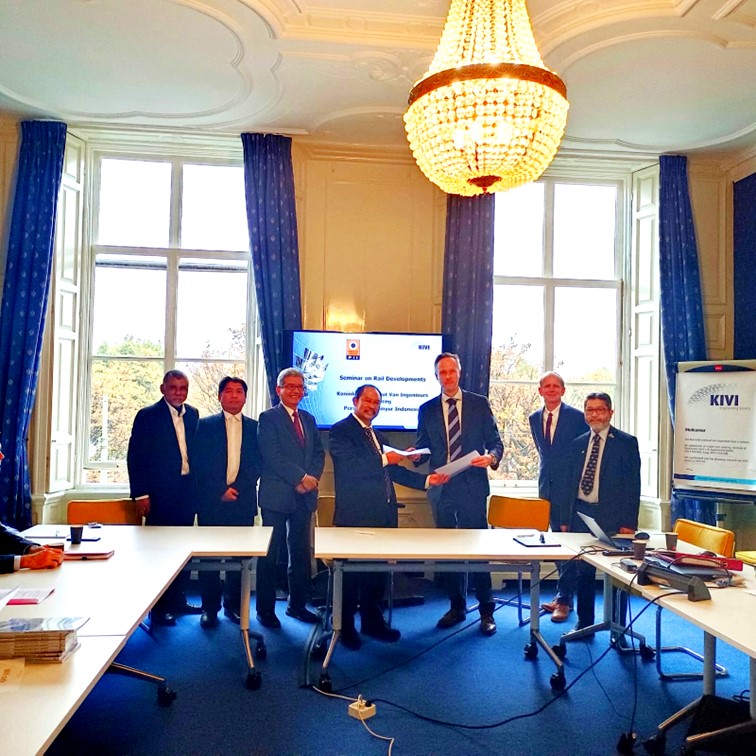 The signing of the MoU between KIVI – PII (Photo: Krisna Amir Hamzah).

delivered by In the afternoon session, KIVI presented three papers, namely, the first on the development of ERTMS (European Rail Traffic Management System) in the Netherlands, which was presented by Mr. Bollinger Bass. ERTMS is a standard system that is applied in all European countries, to regulate signaling and train speed, so that trains from various European train operators can operate in all countries that apply ERTMS. Thus safety and interoperability are guaranteed. The second was about preventive maintenance which was conveyed by Mr. Erland Tegelberg. The third is about the influence of climate on the safety of train travel, which was conveyed by Mr. Rene Peusens. As we know, due to changes in global weather, even in the Netherlands, the weather has become extreme, such as excessive summer temperatures, causing the rails to bend, to major floods similar to floods in Indonesia which caused damage to rail road construction.

In total, the event, which took place from 10 am to 14 pm, was attended by about 25 engineers. This meeting between PII - KIVI is historic, because in the 21st century, PII and KIVI have officially met each other in 2022. Each institution this year is celebrating its special anniversary, namely 175 years of KIVI and 70 years of PII. . Therefore, to honor Indonesian guests, KIVI provides a lunch menu “Rijsttafel”, a culinary menu that is very popular in the Netherlands.

One of the "positive values" of the Netherlands is that if we visit this mill for vacation, business or any purpose, we can still enjoy the Indonesian atmosphere, because the Dutch are very familiar with Indonesian cuisine. In almost every city, we can find restaurants, shops or supermarkets that sell Indonesian cuisine. We do not find this in other European countries.***