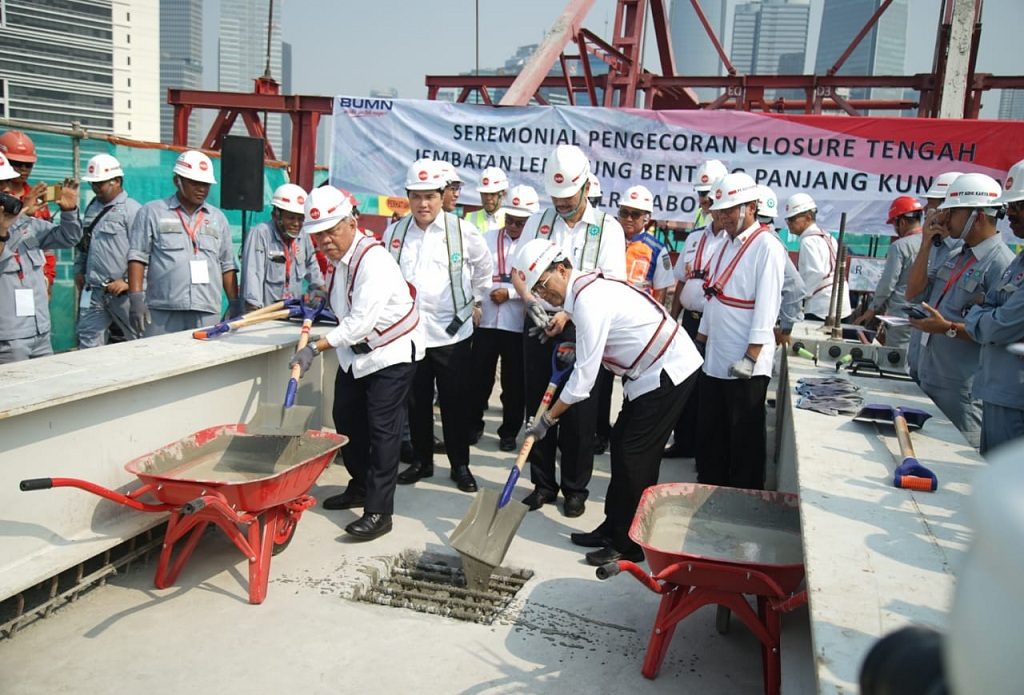 On Monday (11/11), the latest casting was carried out from the Kuningan Long Span Bridge in the Jabodebek Transit Light Infrastructure Construction Project. This activity takes place at the junction of Jl. HR Rasuna Said and Jl. Gatot Subroto, South Jakarta.

The ceremony was attended by the Coordinating Minister for Maritime and Investment Affairs, Luhut Binsar Pandjaitan; Minister of Transportation, Budi Karya Sumadi; Minister of State-Owned Enterprises, Erick Thohir; and the Minister of Public Works and Public Housing, Basuki Hadimuljono. In addition, the Director General of Railways of the Ministry of Transportation Zulfikri was also present, and the President Director of PT Adhi Karya (Persero) Tbk. Budi Harto along with other Directors.

Behind the construction of the Kuningan Bridge structure with the longest span of the arch in the world, there is a female engineer who plays the role of the Bridge Design Consultant. He is Arvilla Delitriana.

The government, through the Minister of PUPR, Basuki Hadimuljono and the Minister of Maritime Affairs, Luhut Binsar Pandjaitan, expressed their appreciation to Arvilla Delitriana.

In addition, appreciation was also given to ADHI and its engineers who have built the pride of Indonesia.

The ceremonial ended with a symbolic handover of MURI record for the longest span and the smallest Radius Concrete Box Bridge Rail Bridge in Indonesia, as well as the second Axial Statistic Loading Test Record on the Bored Pile Foundation with the Largest Load in Indonesia and the laying of cement on the Kuningan long span arch bridge. conducted by all the Ministers and Directors present.

For information, the Kuningan long span bridge includes the Cawang-Kuningan-Dukuh Atas service crossing. At present the progress has reached 58.3 percent.