Srikandi Longspan Engineer LRT in the World's Longest Had Underestimated

Grateful, that's the only word spoken by Arvilla Delitriana when asked how it feels to have a flood of praise. The compliments even came from ministers to President Joko Widodo (Jokowi).

The work in question is the longspan curved bridge project (longspan) in Kuningan, South Jakarta on the Jabodebek LRT project. This longspan construction hovers over flyovers and tolls in the city with a curved shape along 148 meters with a curved radius of 115 meters.

"Alhamdulillah, I can only say that. Because actually when viewed from my current achievements, thank God I am also very grateful. I can complete this bridge with stages that are not easy," he said while talking with AFP.

"Previously, many of my bridges that I designed were also not easy. It might just be the moment, and the location is too far, in remote Riau, yesterday Kalikuto in Semarang also Mr. Jokowi inaugurated. Yes, but maybe now because it's in Jakarta," added the woman who was familiarly called Dina.

When building the longspan in Kuningan it was enough to draw attention from motorists who crossed the Gatot Subroto road. Its curvature is right above the overpass and there is no pillar or pier in the middle, making the passing driver worry.

"The challenge is actually there, when it has not been connected. So actually if I say that I can do it, I think the contractor can do it, the subcontractors who can translate me want this, they have to do this, that they can follow it," he said.

When the longspan development process is indeed to be done carefully. Because underneath there are several roads, including toll roads.

"Maybe what is dangerous is also not allowed to have a single object falling, because underneath it is a high-speed toll road, one falling bolt can shock the driver. It means that the implementation must be correct, I also appreciate it with his team Adhi Karya Alhamdulillah to date 1 point the bolt did not fall into the road, "he said.

Dina herself actually has a good relationship with PT Adhi Karya (Persero) Tbk, which is working on the Jabodebek LRT project. The company where PT Cipta Graha Abadi works is often used by Adhi Karya.

Even so, Dina must pass the competition process with 3 bridge designers from France. Eventually he defeated 3 foreign design consultants.

"So out of the three designs, one was chosen, but with a pole in the middle. Now because I need help, Adhi Karya asked for help. I can not help the one in the middle. I said that if the pier bridge in the middle, I don't recommend it and I don't want to do it, "he explained.

According to Dina, if the bridge using the pier in the middle it will be very difficult. Because underneath there is an overpass that runs tightly and fairly wide. Even if you can, you must use super-sophisticated technology at a substantial cost.

"I said I wanted to help, but there was no pier in the middle, curved. There was a conflict. They were against me, but I was firm. That should be possible. Because of my first consideration such a bridge had ever been done, but not all that long. Only that's all, "he said.

Dina was confident in the design method she made, because she had previously designed the TransJakarta flyover in Adam Malik in a curved shape. It's just shorter, which is 128 meters.

"So if the supervisors said from Japan, Korea they said how to connect, this is curved. I said I was sure that it could. They did not believe Indonesian engineers could and did not believe the contractors could," he said.

Dina remembered when she first brought her design to the meeting. At that time he was underestimated by foreign consultants such as consultants from France, Systra.

"When I first came, it was like selling drugs coming alone, being asked 'can you design a bridge?' said the Frenchman. One of the directors of Adhi Karya came saying that we were just waiting to be able to work together again with Mrs. Dina, where I showed my bridge slides, from where Systra believed I could design a bridge, but I didn't agree because it took a long time. contradiction, finally Adhi Karya believes my design can be done and Adhi Karya can do. Thank God it happened, "he recalls. 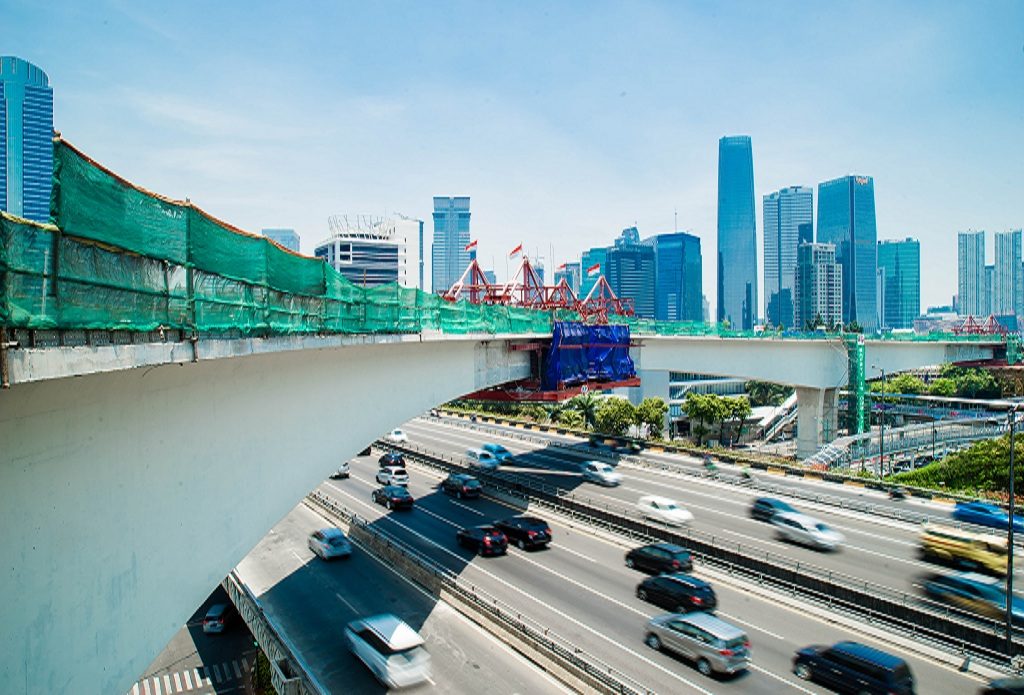 Many people consider that currently the longspan curved bridge with a length of 148 meters has never existed in the World. Dina herself once made a 180-meter longspan design in Perawang, Riau but the shape was straight.

"So the one from Japan says this is the first time in the world you cannot copy. Yes, what do you cheat. But I'm sure you can. Because the basic principles are there, but this is long, indeed the level of risk will be longer and greater," he said.

According to him, the process from the time he submitted the design to finally starting the work took up to two years. Because in addition to having to deal with consultants, Dina also had to get a design certification worthy of KKJTJ (Bridge and Tunnel Road Safety Committee).

"So the process of adjusting to completion takes a long time, and the bridge cannot cast it all, go one step up to 3-4 days old then I can say, sewn, wait for it to be firmly drawn, then move forward, pull it forward, "he concluded.